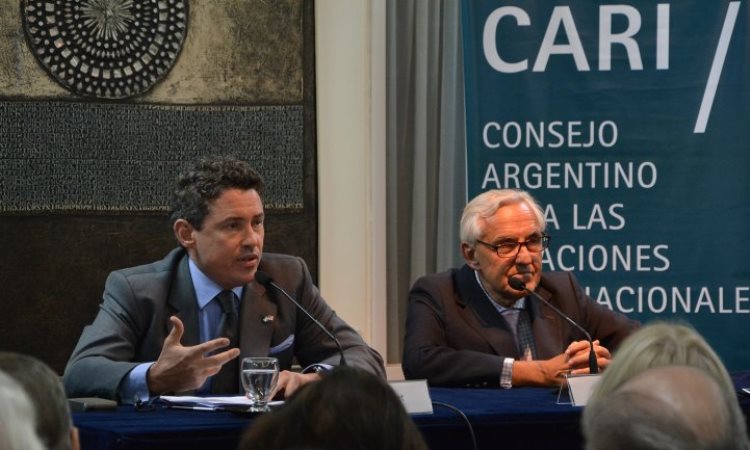 Ambassador Mamet at the CARI (Photo: courtesy of CARI)

Thank you, Rosendo for the warm welcome. And thanks to everyone for coming here today. You are important partners as we strengthen the relationship between our two countries. The Embassy has been proud to sponsor this series of lectures to explore different aspects of the history of the United States, and facets of our important bi-lateral relationship.  What an amazing time to be in Argentina.

It has been fascinating for me to watch the Argentine elections as they unfolded.  This presidential election was truly historic.  As you know, it was the first time presidential candidates debated on television and the first time a run-off election took place for the office of president.

I’ve been involved in American politics for decades so I was fascinated by the elections here (all 6 of them in the city!) and pleased that voters were so enthusiastic on Election Day.

I was also struck by how important social media turned out to be in the campaigns, not just for reaching people but for getting them actively involved in the electoral process.

As I’ve said throughout the year, I’m very optimistic about the future of the U.S.-Argentina bilateral relationship.

I spoke with President Macri on election night to congratulate him and President Obama called soon after that.  During these calls, we underscored our desire to build a stronger, deeper partnership with Argentina.

We’ve since had a number of calls and letters from Vice President Biden, Secretary Kerry, Secretary Lew, and high ranking members of Congress to President Macri and Cabinet members.

In all our conversations, there has been a common theme:  we all want a positive, collaborative bilateral relationship.  Of course this doesn’t mean we’re always going to agree.  But it does mean we’re going to have dialogue to build understanding in areas where we differ and to move forward together where we share common objectives.

We’re going to do everything possible to make that happen and to create tangible benefits to benefit both our countries.

We recognize the challenges Argentina faces and stand ready to help. We look forward to partnering on security and law enforcement matters, deepening our commercial relationship, and energy cooperation, and further strengthening people-to-people ties through education and cultural exchanges.

I know the Macri government shares our commitment to countering terrorism and violent extremism, promoting democratic principles and respect for human rights around the world, and to advancing global environmental protection.

We can have a strong collaboration with Argentina on global security and peacekeeping efforts. Argentina’s participation in the UN peacekeeping mission in Haiti has been critical to the hemisphere’s efforts to restore democracy and stability in that country. And I believe there’s more we can do together on these kinds of critical life-saving missions.

We also see in President Macri a strong partner in upholding democratic principles in the region.  Like the Argentine government, we were pleased to see that in recent parliamentary elections, Venezuelan citizens were able to exercise their right to vote for their country’s future.  We welcome Argentina’s leadership in urging a renewal of the region’s commitment to democratic principles, human rights, and healthy political institutions.

Strong democratic institutions are important, and they help build the framework for a strong economy as well.

Most people agree that the new government faces some tough economic challenges, but President Macri’s economic team inspires confidence. They were already making the policy adjustments needed to attract new international and Argentine investment that will create jobs and build sustainable, inclusive economic growth. American companies will be strategic partners, as Dow showed today with its new investment in the energy sector.

Recently, we’ve had great success working with the City of Buenos Aires on entrepreneurship.  We provided support, through the Small Business Network of the Americas program, to establish local centers that help entrepreneurs and small businesses succeed. Creating an innovative ecosystem is the key to future economic development and the U.S. government is a willing partner to support this effort. In fact, last Thursday, we discussed with President Macri’s team the possibility of connecting small businesses in Argentina with markets in the U.S. because we know that most new jobs are created by small businesses.

One area where private sector and public sector interests intersect is renewable energy.  And we at the U.S. Embassy want to lead by example.  Just two weeks ago, we unveiled solar panels on our building.  In fact, we were the first Embassy in Argentina to have renewable energy and from the energy generated; we’ll power our consular operations and electric vehicles.

Argentina is among the top countries in the world in terms of potential for the development of renewable energies. As you know, the country has some of the world’s best potential for solar power in the north, and wind energy in the south. The possibilities for renewable, sustainable energy are endless.

Development of these industries will not only help in the fight against climate change, but will create new jobs in solar and wind production and installation. In fact, in my home state of California the number one industry in the creation of new jobs last year was the installation of solar panels on homes. And all this will create huge economic savings in Argentina, as it has in the U.S.

The historic agreement signed in Paris last weekend is a wonderful reminder of what the world can accomplish together. President Macri’s brought a new level of commitment to the global climate negotiations at a critical time, and Argentina joined the world in securing a monumental success for the planet and its people. This is the type of cooperation we believe can make both our countries stronger and the world safer.

Another area that makes both of our nations stronger is academic exchange programs. That is why creating new educational exchanges is one of my key goals.  Just yesterday, we hosted 50 scholarship winners of the new Friends of Fulbright program. These students will visit U.S universities for short-term studies and cultural enrichment. Through this experience, we’ll be opening doors and building bonds with the next generation of leaders in Argentina.

The Friends of Fulbright exchange program will help us reach the goals President Obama laid out in the 100,000 Strong in the Americas initiative. And it will create the personal connections vital to our future relationship.

It’s hard to believe that I’ve already been in Argentina nearly a year…the time has flown as we’ve seen some historic changes.  I’m optimistic that we are going to see a stronger, more vibrant Argentina, and an even more productive U.S.-Argentina relationship.