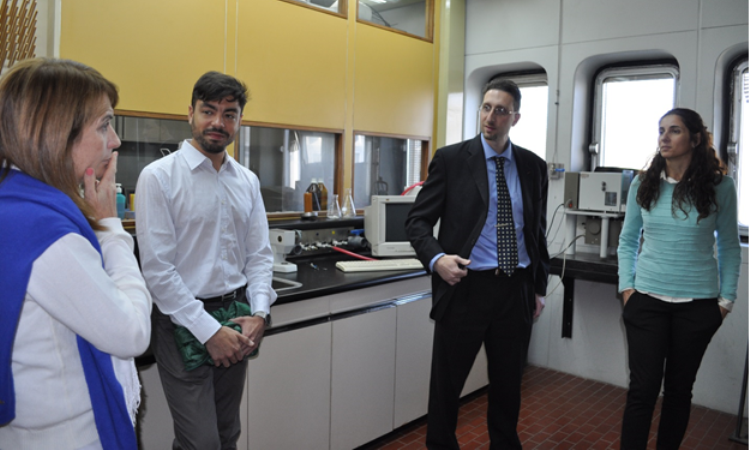 Plastics are everywhere! Indeed, the very ubiquity of polymeric materials –plastics! may obscure the fact that they don’t occur naturally, but rather are made, in almost all cases, from petroleum. And as miraculous as they may seem, they suffer from numerous disadvantages: in addition to being derived from non-renewable sources, many are toxic, while others, notably epoxy resins, are flammable.

Dr. Diana A. Estenoz, a researcher at the Institute for Technical Development for the Chemical Industry of the National Scientific and Technical Research Council (Spanish: Consejo Nacional de Investigaciones Científicas y Técnicas, CONICET) in Santa Fe and a professor of Chemical Engineering at the Universidad Nacional del Litoral and the Instituto Tecnológico de Buenos Aires, is working to change that. With the help of Dr. Marisa E. Spontón, Dr. Emilio Berkenwald, and Dr. Verónica Nicolau, Estenoz is attempting to develop high-performance polymers derived from biomass. The project is funded by the U. S. Army International Technology Center – Argentina (ITC), whose offices are located in the U.S. Embassy in Buenos Aires.

Dr. John La Scala, a polymers expert from the U.S. Army Research Laboratory in Aberdeen Proving Ground, Maryland (USA) who is collaborating with Estenoz on the project, traveled to Santa Fe (Argentina) on 14-15 June 2016 to meet with the CONICET team and with ITC Director Dr. Timothy Pritchett, who manages the project. At that meeting, Dr. Estenoz and her colleagues described the progress that they have made during the initial nine months of the project in developing a mathematical model for the polymer formation and curing process. The model, which predicts selected physical properties of the final polymers, will eventually be used to guide the design and synthesis of new polymers. To this end, La Scala supplied experimental data that will be used to validate the model, and in the coming months, his colleagues in the US will perform additional experimental measurements to complete the validation process.