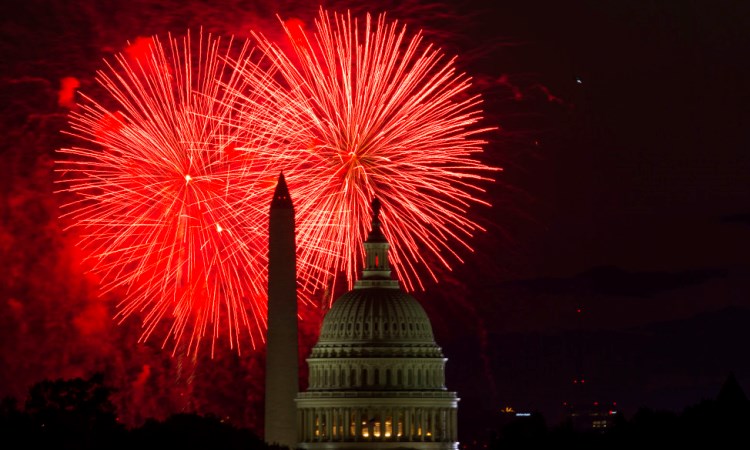 Fireworks illuminate the sky over the U.S. Capitol building and the Washington Monument during Fourth of July celebrations, on July 4, 2014, in Washington. (AP Photo)

The United States, like other nations, sets aside a number of days each year to commemorate events, people or public occasions. These holidays typically are marked by a general suspension of work and business activity, and by public and/or religious ceremonies.

Technically, the United States does not celebrate national holidays, but Congress has designated 10 “legal public holidays,” during which most federal institutions are closed and most federal employees are excused from work. Although the individual states and private businesses are not required to observe these, in practice all states, and nearly all employers, observe the majority of them.

Since 1971, a number of these have been fixed on Mondays rather than on a particular calendar date so as to afford workers a long holiday weekend.

Americans celebrate the beginning of a new year at home, with friends, and in gatherings from the Tournament of Roses Parade in California to the giant gathering in New York’s Times Square. Full Text (pdf)

On November 2, 1983, President Ronald Reagan signed legislation establishing a legal holiday honoring Martin Luther King, Jr. (born January 15), the 1964 Nobel Peace laureate and the individual most associated with the triumphs of the Civil Rights movement during the 1950s and 1960s. By 1999, all 50 states observed the holiday… Full Text

Each February, National African American History Month honors the struggles and triumphs of millions of American citizens over the most devastating obstacles — slavery, prejudice, poverty — as well as their contributions to the nation’s cultural and political life… Full Text

The February 22 birthday of George Washington, military leader of the American Revolution and first president of the United States, has been a legal holiday since 1885. As a number of states also celebrated the February 12 birthday of Abraham Lincoln, the 16th president, some legislators advocated combining the two events into a single holiday. The final legislation retained the Washington’s Birthday holiday, but many Americans now call the holiday “Presidents’ Day.” Full Text (pdf)

Women’s History Month – As recently as the 1970’s, women’s history was virtually an unknown topic in the K-12 curriculum or in general public consciousness. To address this situation, the Education Task Force of the Sonoma County (California) Commission on the Status of Women initiated a “Women’s History Week” celebration for 1978… Full Text

Beginning after the 1861–65 Civil War, many states observed a May 30 holiday (known as “Decoration Day”) honoring the lives lost in that conflict, often by decorating their graves with flowers. After the First World War, these ceremonies were expanded to include the nation’s war dead in every conflict. All 50 states observe the holiday in honor of those who died defending their nation… Full Text

The Independence Day holiday commemorates the adoption of the Declaration of Independence by the Second Continental Congress on July 4, 1776. The holiday was already widely observed throughout the nation when Congress declared it a federal legal holiday in 1870. Full Text (pdf)

First observed in New York City in September 1882, the Labor Day holiday commemorates the contributions of working men and women. In 1894, President Grover Cleveland signed legislation establishing the federal holiday. Labor union participation in annual parades remains common, while for many Americans the holiday remarks the unofficial end of summer and beginning of the school year… Full Text

This holiday commemorates Christopher Columbus’s first landing in the Americas on October 12, 1492. Beginning in the late 19th century, Italian-Americans began to honor the day as a celebration of their heritage, as Columbus is widely believed to be of Italian origin. In 1937, President Franklin D. Roosevelt proclaimed the federal holiday… Full Text

What started at the turn of the century as an effort to gain a day of recognition for the significant contributions the first Americans made to the establishment and growth of the U.S., has resulted in a whole month being designated for that purpose… Full Text

The Veterans Day holiday is derived from Armistice Day, commemorating the end of the First World War on November 11, 1918. Congress proclaimed a federal holiday in 1938, and in 1954 changed the holiday’s name to Veterans Day in recognition of those who served during the Second World War and the Korean conflict. Today it recognizes all members of the armed forces, living and dead, who served during times of peace or war. (Memorial Day, by contrast, honors those who gave their lives.) While Veterans Day was among the holidays moved to Mondays beginning in 1971, Congress in 1978 restored the holiday to its original November 11 date. Among the annual ceremonies is one at the Tomb of the Unknowns at Arlington National Cemetery near Washington… Full Text

A variant of the harvest festivals celebrated in many parts of the world, Thanksgiving is traced to a 1621 feast enjoyed by the English Pilgrims who founded the Plymouth Colony (located in present day Massachusetts) and members of the Wampanoag Indian tribe. In 1863, during the long and bloody civil war, President Abraham Lincoln proclaimed the last Thursday in November “a day of Thanksgiving and Praise.” Congress made Thanksgiving a legal federal holiday in 1941 and moved the holiday from the last Thursday in November to the fourth Thursday, in hopes of stimulating the economy by lengthening (in some years) the Christmas shopping season. The holiday is the occasion for a large and festive meal, and for expressing thanks for that bounty. Full Text

World AIDS Day, observed December 1 each year, is dedicated to raising awareness of the AIDS pandemic caused by the spread of HIV infection. AIDS has killed more than 25 million people, with an estimated 38.6 million people living with HIV, making it one of the most destructive epidemics in recorded history… Full Text

Most Christians celebrate the birth of Jesus of Nazareth on December 25. Before the 19th century, many Americans worked on Christmas, but in the industrial era the holiday also began to honor universal values such as home, children and family life, and to incorporate secular customs like exchanging gifts and cards, and the decoration of evergreen trees. Congress proclaimed Christmas a federal holiday in 1870. In 1999, a federal court acknowledged the secular aspects of Christmas in rejecting a claim that the holiday impermissible endorsed and furthered a particular religious belief… Full Text