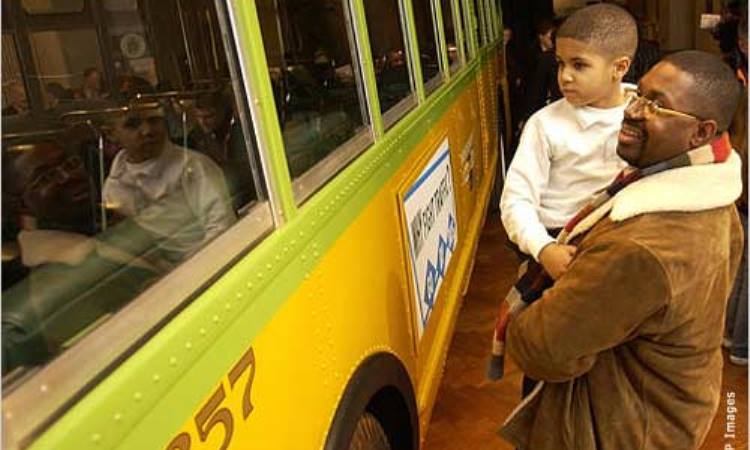 A man and his son see the bus in which Rosa Parks refused to give up her seat in 1955, a landmark in the civil rights movement. (AP Image)

Each February, National African American History Month honors the struggles and triumphs of millions of American citizens over the most devastating obstacles — slavery, prejudice, poverty — as well as their contributions to the nation’s cultural and political life.

According to the U.S. Census Bureau, African Americans make up about 14 percent of the U.S. population and comprise the second-largest minority group, after Hispanics.

The election of Barack Obama, America’s first African-American president, continues to lend Black History Month a special significance. In his inaugural address, President Obama acknowledged the historical importance of a moment in which “a man whose father less than 60 years ago might not have been served at a local restaurant can now stand before you to take a most sacred oath.”

HONORING ACCOMPLISHMENTS OF BLACK AMERICANS
National African American History Month was the inspiration of Carter G. Woodson, a noted scholar and historian, who instituted Negro History Week in 1926. He chose the second week of February to coincide with the birthdays of President Abraham Lincoln and the abolitionist Frederick Douglass.

The celebration was expanded to a month in 1976, the nation’s bicentennial. President Gerald R. Ford urged Americans to“seize the opportunity to honor the too-often neglected accomplishments of black Americans in every area of endeavor throughout our history.”

Carter G. Woodson, the son of former slaves in Virginia, realized that the struggles and achievements of Americans of African descent were being ignored or misrepresented. He founded the Association for the Study of African American Life and History (ASALH), which supports historical research, publishes a scholarly journal and sets the theme for Black History Month each year.

John Fleming, ASALH president from 2007 to 2009 and director emeritus of the Cincinnati Museum Center, said President Obama’s heritage — a black father born in Kenya and a white mother born in the United States — “continues to reflect the contributions Africans and Europeans have made to American history from the very beginning.” 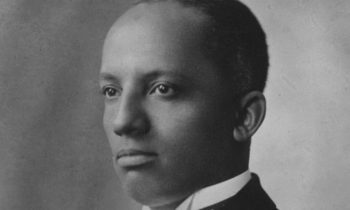 Fleming said he believes National African American History Month should focus on positive as well as negative aspects of the black experience. “Certainly, struggle has been an ongoing theme in our history from the very beginning. However, we were not slaves prior to being captured in Africa — and while slavery was part of our experience for 250 years, we have a hundred-and-some years in freedom that we also need to deal with.”

He said he has seen “substantial progress on many fronts,” but “at the same time there are still major problems that have to be addressed, one being the permanent underclass in urban areas now. We don’t seem to be able to break that cycle of poverty. And there are still some major rural pockets of poverty”such as in the Mississippi Delta.

“I think that African-American history gets more attention during February than during any other time of year, “ Fleming said, “and I think it’s an opportunity for us in the field to emphasize that it is something that should be studied throughout the year.”

Each year, the U.S. president honors Black History Month, or African-American History Month as it is also called, with a proclamation and a celebration at the White House. States and cities hold their own events around the country, and media feature topics related to black history.

ASALH has its headquarters in Washington, where Woodson lived from 1915 until his death in 1950. His home is designated a national historic site.

In 2003, President George W. Bush signed legislation to establish the Smithsonian Institution’s National Museum of African American History and Culture, which will be located on the National Mall near the Washington Monument.