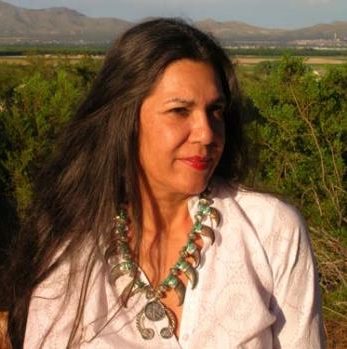 Raised in a working-class neighborhood in Chicago, Castillo credits the powerful storytelling tradition of her Mexican heritage as the foundation and inspiration for her writing. By the time she graduated from college, Castillo had already begun to establish herself as a dynamic poetic voice: she published poems in anthologies and magazines as a college student, and three volumes of poetry followed shortly thereafter. In the mid-1980s, Castillo turned to fiction. So Far From God, her first novel to be widely read, was published in 1993. Publications following this include the short story collection Loverboys, which Booklist called “defiant, satirically hilarious, sexy, and wise,” and the novel Peel My Love Like an Onion, praised by Publishers Weekly for being “sardonic and seductive…[a] compulsively readable narrative.”

Castillo has been a contributor to many anthologies, including The Third Woman: Minority Woman Writers of the United States, Cuentos Chicanos, and Goddess of the Americas, and her writings have been published in Frontiers, the Los Angeles Times, The Nation, the San Francisco Chronicle, and The Washington Post, among others.

Castillo is passionately involved in nurturing the voices of other authors. She is the Publisher and Editor-in-Chief of La Tolteca, an arts and literary zine dedicated to the advancement of a world without borders and censorship, and is on the advisory board of the new American Writers Museum in Washington, D.C. Castillo held the Sor Juana Inés de la Cruz Endowed Chair at DePaul University, The Martin Luther King, Jr. Distinguished Visiting Scholar post at MIT, and was the Poet-in-Residence at Westminster College in Utah and the Lund-Gill Endowed Chair at Dominican University. In 2016 she was awarded the Outstanding Latino/a Cultural Award in Literary Arts or Publications by the American Association of Hispanics in Higher Education. This award is given to Latinos/as who have contributed significantly to our understanding of our Hispanic community and/or culture through literary arts, scholarship, and publications.

Much sought-after for speaking engagements, Castillo speaks on the craft of storytelling as well as Xicana identity and culture. She lives in New Mexico.