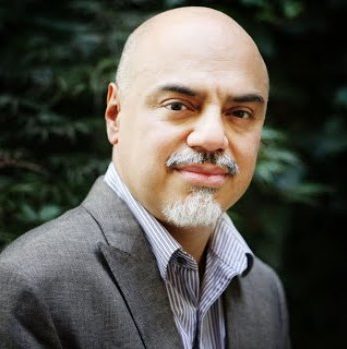 Héctor Tobar (born 1963, Los Angeles) is a Los Angeles author and journalist, whose work examines the evolving and interdependent relationship between Latin America and the United States.

Tobar is the son of Guatemalan immigrants. His long career in journalism includes work for The New Yorker, LA Weekly, and many positions at the Los Angeles Times. He was a Metro columnist for The Times, a book critic, and the paper’s bureau chief in Mexico City and in Buenos Aires, Argentina. He also worked for several years as the National Latino Affairs Correspondent. Additionally, Tobar contributed to the newspaper’s Pulitzer Prize-winning coverage of the Los Angeles riots of 1992. He is a graduate of the University of California, Santa Cruz and the MFA program in Creative Writing at the University of California, Irvine.

Tobar is the author of The Tattooed Soldier, a novel set in the impoverished immigrant neighborhoods of Los Angeles in the weeks before the riots, and in Guatemala during the years of military dictatorship there. His non-fiction Translation Nation: Defining a New American Identity in the Spanish-Speaking United States, is a cross-country journey with stops in many of the new places where Latin American immigrants are settling, including Rupert, Idaho, Grand Island, Nebraska and Memphis, Tennessee. His third book, The Barbarian Nurseries, is a sweeping novel about class and ethnic conflict in modern Southern California: it was named a New York Times Notable Book for 2011 and won the 2012 California Book Award gold medal for fiction.

During the 2010 Copiapó mining accident, while still trapped in the mine, the 33 miners chose to collectively contract with a single author to write an official history so that none of the 33 could individually profit from the experiences of others.[5][6] The miners chose Héctor Tobar who had exclusive access to the miners stories. In October 2014, he published an official account titled Deep Down Dark: The Untold Stories of 33 Men Buried in a Chilean Mine, and the Miracle That Set Them Free. It was a finalist for the 2014 National Book Critics Circle Award (General Nonfiction).

Tobar has been an adjunct professor at Loyola Marymount University and Pomona College and is currently an assistant professor at the University of Oregon’s school of journalism and communication.