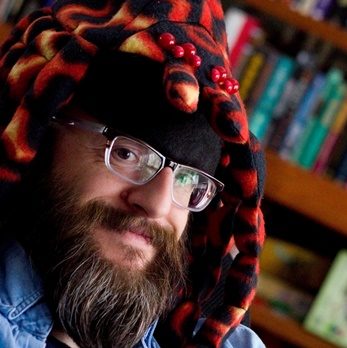 Jim C. Hines’ first novel was Goblin Quest, the humorous tale of a nearsighted goblin runt and his pet fire-spider. Actor and author Wil Wheaton described the book as “too f***ing cool for words,” which is pretty much the Best Blurb Ever. After finishing the goblin trilogy, he went on to write the Princess series of fairy tale retellings and the Magic ex Libris books, a modern-day fantasy series about a magic-wielding librarian, a dryad, a secret society founded by Johannes Gutenberg, a flaming spider, and an enchanted convertible. He’s also the author of the Fable Legends tie-in Blood of Heroes. His short fiction has appeared in more than 50 magazines and anthologies.

Jim is an active blogger about topics ranging from sexism and harassment to zombie-themed Christmas carols, and won the Hugo Award for Best Fan Writer in 2012. He has an undergraduate degree in psychology and a Masters in English, and lives with his wife and two children in mid-Michigan.