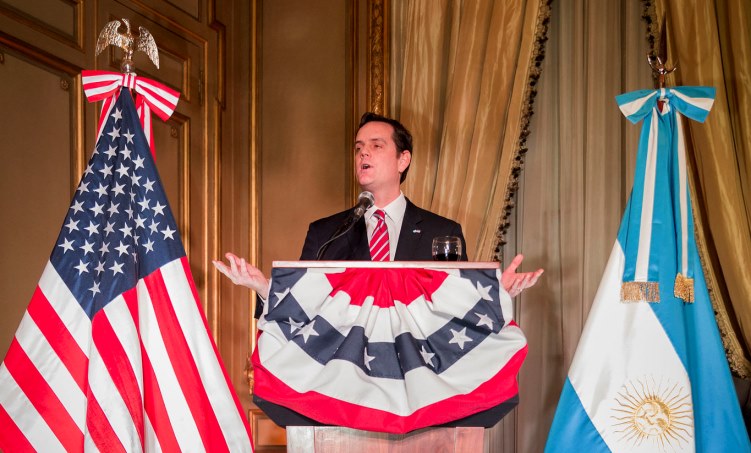 The Embassy of the United States hosted a reception yesterday at the Bosch Palace to celebrate the 241st anniversary of the declaration of U.S. Independence.  The U.S. Chargé d’ Affaires Thomas Cooney welcomed the guests.  Government representatives; members of the diplomatic corps; business, academic and cultural leaders; journalists; members of the Armed Forces, and distinguished representatives of all walks of society attended the event.

After thanking the guests, the Chargé talked with the journalists, and described the bilateral relation as “very positive, stable, and mature.” “We are on a very good track, working on many areas,” he added, and continued to highlight the collaboration at the OAS among the United States, Argentina and other countries in the region to find a way out of the crisis in Venezuela.

This year, the celebration featured the Mississippi River.  Three rooms of the Bosch Palace were decorated to represent three of its most representative delta cities: Memphis, New Orleans, and St. Louis.  During the event, the guests enjoyed regional Mississippi River cuisine as well as live music shows.