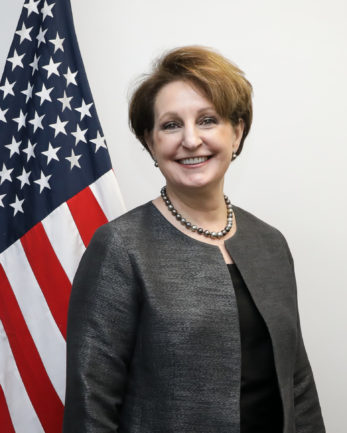 A Foreign Service officer since 1985, she has served at U.S. Diplomatic Missions in China (twice), Ukraine, Hong Kong, Mozambique, Kenya, and the Dominican Republic. Her domestic assignments include Director of the Secretary’s Executive Secretariat Staff and Deputy Director of Korean Affairs.

A native of Little Rock, Arkansas, Ms. Carlson received her BA in Spanish and International Studies from Rhodes College in Memphis, Tennessee. She holds Masters Degrees from Georgetown University (International Relations) and the National War College (National Security Studies).  She is married to retired Foreign Service officer Aubrey Carlson, and they have two daughters.