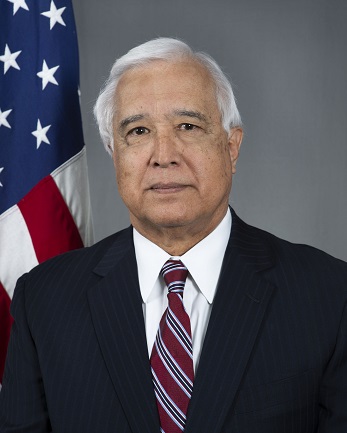 Ambassador to the Argentine Republic
United States Department of State

Edward C. Prado was nominated by the President on January 17, 2018, to serve as U.S. Ambassador to the Argentine Republic. He was confirmed by the Senate on March 22, 2018. Prado is a distinguished Federal jurist, having served as a United States judge for almost 35 years.

He most recently served served as an appellate judge on the United States Court of Appeals for the Fifth Circuit, with a duty station in San Antonio, Texas. During his time on the court, Judge Prado was appointed by the Chief Justice of the United States Supreme Court to serve as chair of the Criminal Justice Active Review Committee, the board of the Federal Judicial Center, and the Defender Services Committee and Judicial Branch Committee of the Judicial Conference of the United States. Prior to his appointment to the Fifth Circuit, Prado served as a district judge for the Western District of Texas for 19 years.

During his time as a judge, Prado also participated in numerous international judicial exchanges, academic conferences, programs, and lectures on various legal topics of importance to the strengthening of legal norms and systems across Latin America. In particular, Prado visited and participated in programs in Argentina focusing on the legal practice and shared challenges faced by both the United States and Argentina.

Ambassador Prado served in the United States Army Reserves from 1972 to 1987, retiring as a captain. He received his B.A. and J.D. from the University of Texas at Austin. He is married to Maria Prado; the couple has one son. He speaks fluent Spanish.