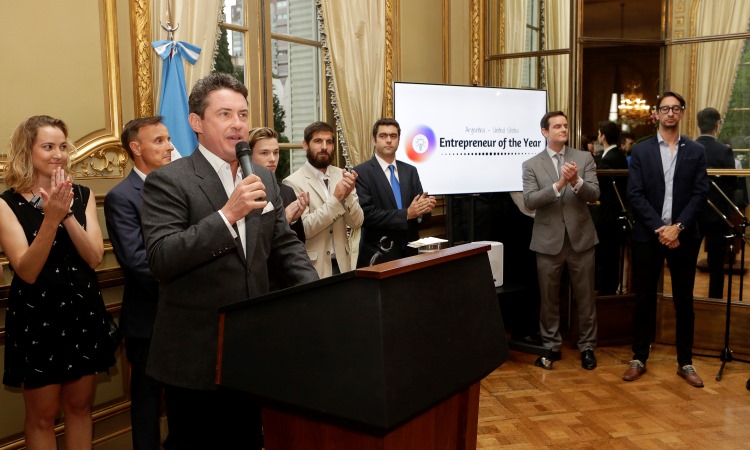 The Embassy hosted the first “Entrepreneur of the Year” Awards Ceremony on December 7th at Palacio Bosch, in collaboration with four institutional partners in Argentina:  the national Ministry of Production, the Ministry of Modernization for the City of Buenos Aires, Endeavor and Vital Voices.

“The impetus for this event was to honor and foster the entrepreneurial spirit I see every day in my role as U.S. Ambassador.  I get to see the incredible human capital and innovative spirit that is everywhere in Argentina, and I wanted a way to show that to a broader audience,” said Ambassador Noah Mamet during the ceremony.

There were three award categories:  For-profit; Non-Profit; and  Renewable Energy.  A panel of judges formed by  government, business, and NGO representatives selected the winners based on entrepreneurial spirit, innovation, strategic direction, market impact, and social responsibility.

Winners were Gino Tubaro from  Atomic Labs in NonProfit, Ezequiel Escobar from USound in For-Profit, and Nicolás Canevaro from Semtive in Renewable Energy. Lucas Toledo from GiFlyBike  won the People’s Choice Award voted by guests at the ceremony.

Runners up were Hugo Menzella and Salvador Peiru from Keclon  in the Renewable Energy category; Lucas Toledo from GiFlyBike  in For-Profits; and Carina Morillo  from Fundación Brincar in Non-profits.

Besides an award designed and printed in a 3D printer by Buenos Aires Maker Faire experts, Non-Profit, For-Profit and People’s Choice Award winners received from sponsors  Microsoft, United and Amazon  a fantastic opportunity:  United air tickets to Microsoft Headquarters in Redmond, Washington to tour their facilities and see how ideas turn into reality, and Microsoft training in cloud and software development as well as coaching and mentoring to all winners.  The Renewable Energy winner won United tickets to Seattle to visit Amazon headquarters and meet with their corporate teams and the innovators that have made Amazon a global success. Additionally, Amazon provided $5000 worth of Amazon WebServices Promotional Credit to all those in second place, and Oracle offered free passes to all the winners, including the People’s Choice awardee, to their annual event in San Francisco. 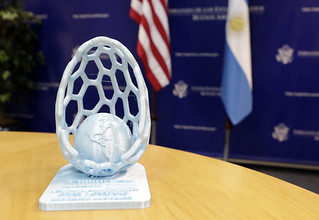