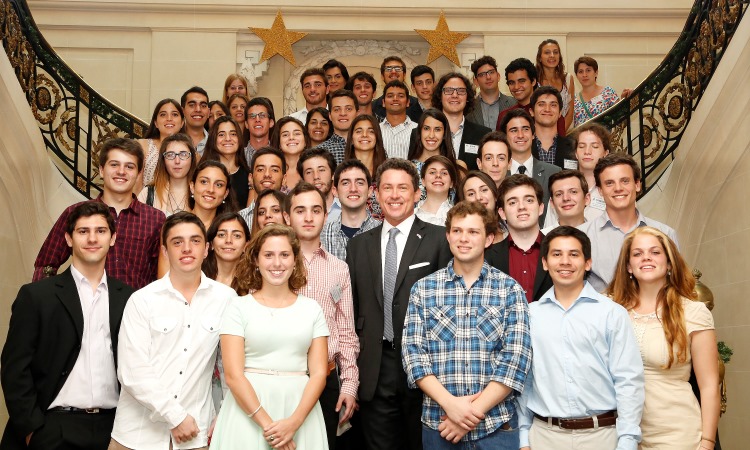 Ambassador Mamet with the 50 winners of the first edition of the Friends of Fulbright scholarship (Photo: Dept. of State)

The Fulbright Commission celebrates the 60th anniversary of the Fulbright Program in Argentina.

Over the last 60 years, the Fulbright Commission, its Board members, and Fulbrighters from Argentina and the United States have truly changed the way we interact between our countries.

Senator J. William Fulbright, who founded the program and in whose honor it is named, said that his purpose when creating this valuable exchange program was “to bring a little more knowledge, a little more reason, and a little more compassion into world affairs and thereby to increase the chance that nations will learn at last to live in peace and friendship.”

The Fulbright program provides funding for students, scholars, teachers, and professionals to undertake graduate studies, advance research, university teaching, and teaching in elementary and secondary schools. Currently, the Fulbright Commission grants nearly 4,500 scholarships annually.  Since its inception, more than 250,000 people have received Fulbright scholarships; three thirds of those recipients are not U.S. citizens. In Argentina, the Program started in November 4, 1956 with the creation of the Fulbright Commission. Since then, more than 7,000 students from both the U.S. and Argentina have had the opportunity to live and study in each other’s country. These alumni are part of a worldwide network of more than 350,000 persons from 155 countries.

In this era of interconnectivity, Fulbright continues to lead the way in academic exchange. In 2011, President Barack Obama challenged the Hemisphere to increase educational exchange through the 100,000 Strong in the Americas initiative.  The goal under this initiative is to have 100,000 students from the United States study throughout the Americas, and 100,000 students from Latin America and the Caribbean study in the United States.  We are working hard to reach this goal and the contributions made through Fulbright are critical to its success.

The U.S. Embassy is extremely proud to be a part of this program that recognizes and rewards the best of Argentina in fields as diverse as literature, science, public administration, law, teaching, mathematics, and more. Argentine Fulbrighters have served as ministers, scientists, researchers, educators, journalists and artists.

Notable Fulbright alumni include 35 Nobel laureates, 65 Pulitzer Prize winners, former Presidents such as Sebastian Piñera and Alejandro Toledo, Ministers from many countries, Grammy Award winners and more alumni than any other academic program.