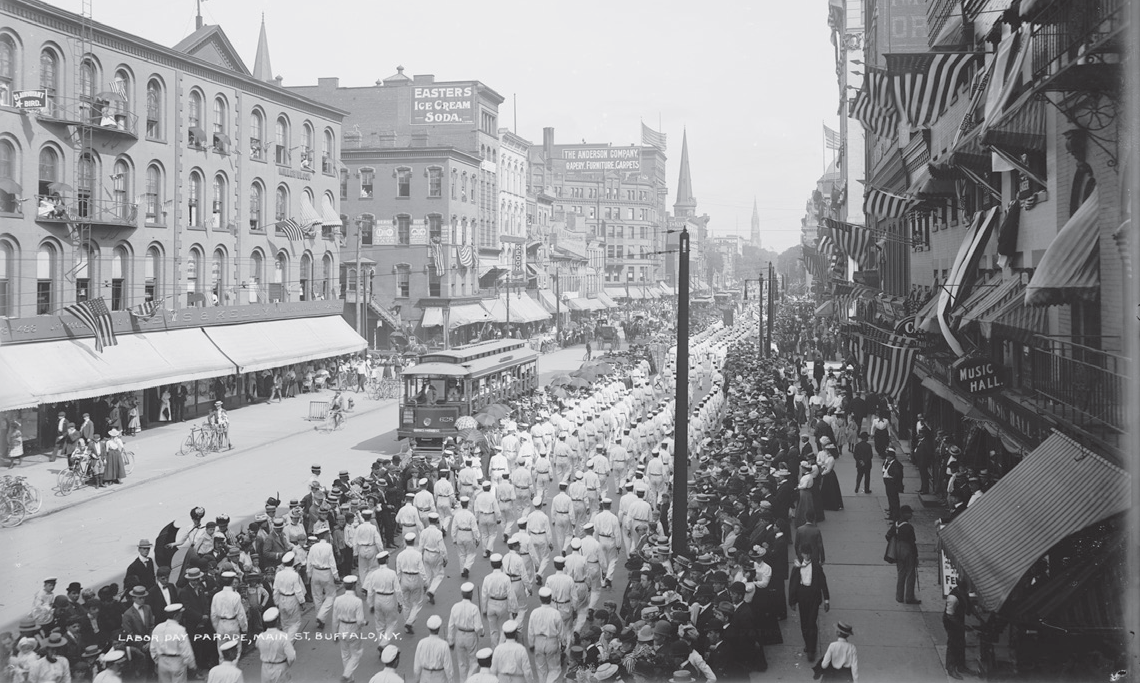 A parade in Buffalo, New York, a century ago was a precursor to Labor Day celebrations still held each year in cities and towns across America. Library of Congress

Labor Day, celebrated in the United States on the first Monday of each September, is the nation’s official commemoration of its workers’ contributions to national strength, prosperity and well-being. It also marks for millions of Americans the unofficial end of summer.

America’s labor force is 154.4 million people strong, or about two-thirds of the working-age population. Men make up slightly more than half (53 percent) of all workers, according to the Department of Labor. About 12 percent of workers belong to a union.

The exact origins of Labor Day are unknown, but scholars typically credit either of two labor union officials — Peter J. McGuire of the national carpenters’ union or Matthew Maguire of a machinists’ local in Paterson, New Jersey — with the idea.

The first Labor Day was celebrated in New York City on September 5, 1882. The date apparently was chosen because it was about halfway between the July 4 Independence Day holiday and Thanksgiving (which falls in November). The occasion was marked by a parade sponsored by the Knights of Labor, an early U.S. labor organization, and about 10,000 workers marched.

The next day’s New York Times reported that “Those who rode or marched in the procession were cheerful, and evidently highly gratified with the display. … The great majority smoked cigars, and all seemed bent upon having a good time at the picnic grounds.” Banners called for “Eight Hours for a Legal Day’s Work” and “Less Hours and More Pay.”

The Knights adopted a resolution calling for recognition of the first Monday of September as Labor Day. By 1894, some 28 states celebrated Labor Day and in that year Congress adopted legislation establishing the legal holiday. 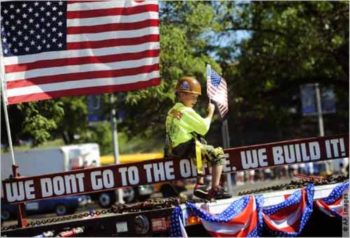 Hunter Ribarchak, 7, rides on the Iron Workers of America's float during the 2008 Labor Day Parade in Pittsburgh, Pennsylvania. (AP Image)

THE UNOFFICIAL END OF SUMMER

The first proposal for the holiday suggested that communities hold a parade to exhibit “the strength and esprit de corps of the trade and labor organizations,” followed by a festival for the recreation and amusement of the workers and their families.

Many American workers see Labor Day as “their” holiday, an opportunity for rest, relaxation and fun. As the New York Times reported of the first Labor Day parade, “It was said that the absence of many members of the organizations was due to the fact that they preferred to enjoy the day in quiet excursions to Coney Island, Glen Island and elsewhere.”

Labor Day traditionally has marked the end of the summer, and in much of the country Americans crowd community swimming pools and beaches for one last dip, and gather for picnics, barbeques and parades.

Another tradition is the Muscular Dystrophy Association telethon. Held each year since 1966 and hosted by entertainer Jerry Lewis, the telethon intersperses performances by major entertainers with requests for donations to fund the association’s fight against more than 40 neuromuscular diseases.