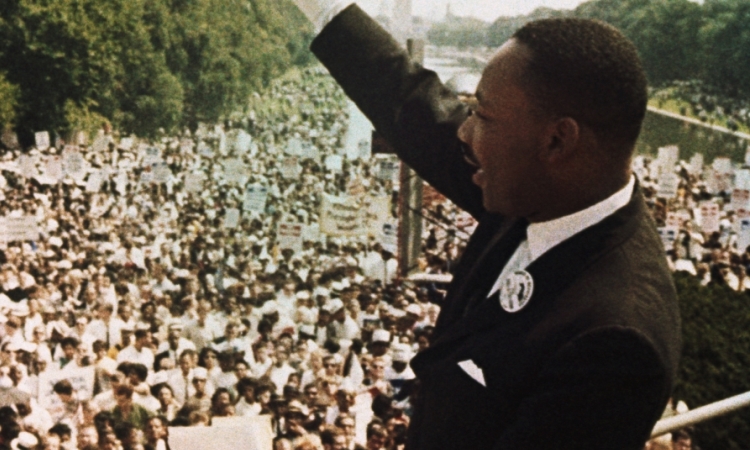 Martin Luther King Jr. acknowledges the crowd at the Lincoln Memorial during the March on Washington on August 28, 1963. (AP/Image)

Americans on each third Monday of January honor the life and achievements of the Rev. Martin Luther King Jr., (1929–1968), the 1964 Nobel Peace laureate and the individual most associated with the triumphs of the African-American civil rights movement during the 1950s and 1960s. As a political organizer, supremely skilled orator and advocate of nonviolent protest, King was pivotal in persuading his fellow Americans to end the legal segregation that prevailed throughout the South and parts of other regions, and in sparking support for the civil rights legislation that established the legal framework for racial equality in the United States.

King was among those champions of justice whose influence transcended national boundaries.  A student of the philosophy and principles of nonviolence enunciated by Mohandas Karamchand Gandhi (1869–1948), King in 1959 traveled to India, where he studied further the legacy of the man his widow, Coretta Scott King, later would call his “political mentor.” Nelson Mandela, accepting the 1993 Nobel Peace Prize, similarly credited King as his predecessor in the effort to resolve justly the issues of racism and human dignity.

Son of the prominent Atlanta pastor Martin Luther King Sr., King at the age of 26 completed a doctorate in theology at Boston University.  In 1954, while completing his dissertation, King accepted the pastorate at the Dexter Avenue Baptist Church in Montgomery, Alabama. It was in Montgomery the following year that Rosa Parks, an African-American seamstress, was jailed for refusing to give up her seat on a segregated municipal bus to a white passenger. The incident sparked the Montgomery Bus Boycott, in which the city’s African-Americans refused to patronize its segregated bus system. King led the organization directing the boycott and became the movement’s public face, appealing to white Americans’ spirit of brotherhood. When the federal courts, following the reasoning of the Supreme Court’s Brown v. Board of Education decision, declared the bus segregation law unconstitutional, King emerged as a national figure.

In 1957, King was among the founders of the Southern Christian Leadership Conference (SCLC). This was an alliance of black ministers and churches organized to pursue nonviolent direct action against segregation. SCLC leaders hoped to change public opinion and to complement the legal challenges to segregation pursued by the National Association for the Advancement of Colored People (NAACP). King was a dynamic force within the SCLC, emerging as its leading fund-raiser and as a skillful political tactician who successfully forged alliances with sympathetic Northern whites. In 1959, King traveled to India, where he met with followers of Gandhi and further refined his thought on nonviolent social protest.

During the early 1960s, King and the SCLC initiated a number of peaceful protests against segregated institutions. In May 1963, Birmingham, Alabama, Police Commissioner Eugene “Bull” Connor unleashed police dogs and high-pressure fire hoses against peaceful demonstrators, many of them schoolchildren.  The images horrified the nation. King was arrested during these demonstrations and from his jail cell produced Letter from Birmingham City Jail, in which he argued that one who breaks an unjust law to arouse the consciousness of his community “is in reality expressing the highest respect for law,” provided he acts “openly, lovingly and with a willingness to accept the penalty.”  That August, African-American leaders organized the March on Washington for Jobs and Freedom.  Here, before an estimated quarter million civil rights supporters gathered at the Lincoln Memorial in Washington, King offered one of the most powerful orations in American history. Generations of schoolchildren have learned by heart lines from the I Have a Dream speech, in which King prayed for the day when people would “not be judged by the color of their skin but by the content of their character.”

The images from Birmingham and Washington helped crystallize support for the Civil Rights Act of 1964, signed into law by President Lyndon B. Johnson on July 2, 1964.  In 1965, the violent Selma, Alabama, police response to a voting rights march sparked a similar surge in support for King, the civil rights movement and for legislation guaranteeing the right of political participation. Consequently, the Voting Rights Act became law on August 6, 1965. 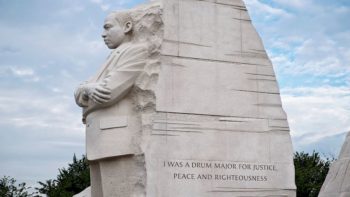 With the passage of these civil rights laws, King continued to employ his strategy of nonviolent social protest even as some younger leaders at times argued for more radical means. King also broadened his agenda to encompass efforts to focus attention on African-American poverty. King was in Memphis, Tennessee, in support of striking black garbage workers when, on April 4, 1968, an assassin’s bullet cut him down at the age of 39.

King died upholding his beliefs. On April 4, 1968, while standing on the balcony of his motel room in Memphis, Tennessee, King was assassinated by James Earl Ray, a white supremacist with a long criminal record. King had been in Memphis to lead a protest march in sympathy with striking sanitation workers of that city.

A campaign to honor King began soon after his death. Workers’ unions provided the financial and social capital to make observance of King’s birthday a nationwide movement. In 1983, President Ronald Reagan signed legislation into law making King’s birthday a federal holiday, but it wasn’t until 2000 that the holiday was officially observed in all 50 states for the first time.

In 1994, the U.S. Congress designated the King holiday as a national day of service, calling on Americans from every walk of life to volunteer their time and effort on that day to help realize King’s vision of a “beloved community.”

King once said: “Life’s most persistent and urgent question is ‘What are you doing for others?’” Each year, Americans attempt to answer that question by volunteering for activities such as fundraising for charities and collecting and distributing food to the needy.