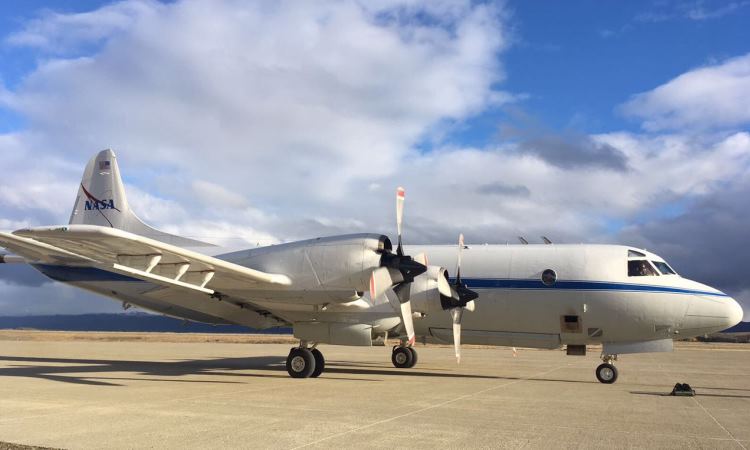 Scientists with NASA’s IceBridge mission travelled to Tierra del Fuego to carry out a set of research flights over Antarctica.  This is the first time, the IceBridge program, designed to study and understand the behavior of glaciers and ice shelves will be based in Argentina.

On October 25, a P-3 aircraft landed in Ushuaia as part of the mission.  The plane is flying over West Antarctica, the continent’s fastest-changing region, targeting sea ice in the Bellingshausen and Weddell seas, and glaciers in the Antarctic Peninsula and along the English and Bryan Coasts.  IceBridge scientists plan at least six P-3 flights and up to eleven, pending weather conditions.

For the first time in its nine years of operations in the southern hemisphere, IceBridge will launch two consecutive, dedicated sets of Antarctic flights from two continents—South America and Antarctica—with two different aircraft and instrument suites.  “This is an exciting and ambitious undertaking for IceBridge, as the dual campaigns will allow us to continue our surveys of important areas near the Antarctic Peninsula and greatly expand our coverage into the vast expanse of East Antarctica,” said Nathan Kurtz, IceBridge’s project scientist and a sea ice researcher at NASA’s Goddard Space Flight Center in Greenbelt, Maryland.

Although IceBridge has been active since 2009, this is the first time it is flying from Ushuaia.  “By flying from Ushuaia instead of Punta Arenas, we’re saving ourselves an hour of flight time during our transit to and from Antarctica because we’re trying to maximize our time collecting new data over and around Antarctica, that hour is a big deal,” Kurtz said.

For the P-3 flights, the mission is carrying its full instrument suite. The main instrument is a laser altimeter that measures the height of the ice surface.  IceBridge is flying two versions of it: one equipped solely with a green laser and, for the first time, a dual-color version that transmits both infrared and green laser pulses. The data gathered by the dual-color laser instrument will be used to tie together IceBridge measurements with those of an upcoming NASA satellite mission—the Ice, Cloud, and land Elevation Satellite-2, or ICESat-2, scheduled to launch in late 2018.

IceBridge mission seeks to collect data on changing polar ice and maintain continuity of measurements between ICESat missions. The original ICESat mission launched in 2003 and ended in 2009, and its successor, ICESat-2, is scheduled for launch in late 2018. IceBridge began in 2009 and is currently planned to continue until 2020 so it to overlaps with ICESat-2 to help scientists connect measurements from the two satellites.

If you are interested in knowing more about the Mission, visit www.nasa.gov/mission_pages/icebridge/mission/index.html