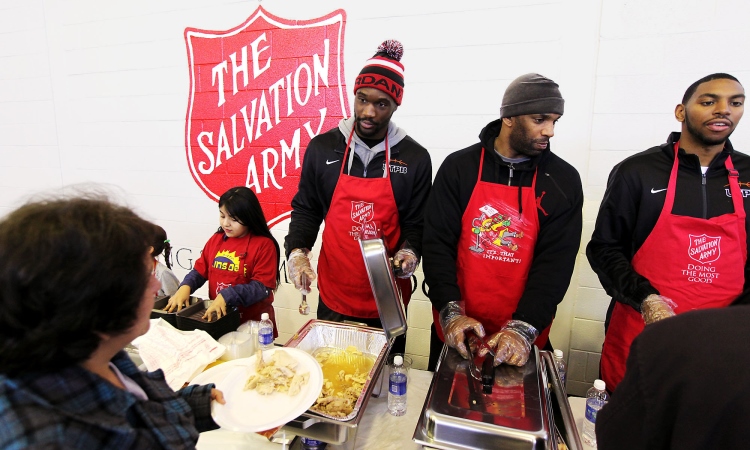 Thanksgiving Day in the United States is possibly the premier U.S. family celebration — typically celebrated at home or in a community setting and marked with a substantial feast. Thanksgiving provides an occasion for reunions of friends and families, and it affords Americans a shared opportunity to express gratitude for the freedoms they enjoy as well as food, shelter and other good things.

Many Americans also take time to prepare and serve meals to the needy at soup kitchens, churches and homeless shelters. Others donate to food drives or participate in charity fundraisers; in fact, hundreds of nonprofit groups throughout the country hold Thanksgiving Day charity races called “Turkey Trots.”

And on a more worldly note, Thanksgiving marks the beginning of the “holiday season” that continues through New Year’s Day. The Friday after Thanksgiving is one of the busiest shopping days of the year.

Every year, the president issues a proclamation designating the fourth Thursday in November a National Day of Thanksgiving. It is an official federal holiday, and virtually all government offices and schools — and most businesses — are closed.

A variant of the harvest festivals celebrated in many parts of the world, Thanksgiving is popularly traced to a 1621 feast shared by the English Pilgrims who founded the Plymouth Colony (located in present-day Massachusetts) and members of the Wampanoag Indian tribe.

The Pilgrims had arrived in 1620, crossing the Atlantic Ocean to separate themselves from the official Church of England and practice freely their particular form of Puritanism. Arriving at Plymouth Colony too late to grow many crops, and lacking fresh food, the Pilgrims suffered terribly during the winter of 1620-1621. Half the colony died from disease. The following spring, local Wampanoag Indians taught the colonists how to grow corn (maize) and other local crops, and also helped the newcomers master hunting and fishing. The Wampanoag were a people with a sophisticated society who had occupied the region for thousands of years, says the National Museum of the American Indian.

Because they harvested bountiful crops of corn, barley, beans and pumpkins the Pilgrims had much to be thankful for in the fall of 1621. The colonists and their Wampanoag benefactors — who brought deer to roast — held a harvest feast to express gratitude for God’s blessings. Although it is known that the colonists provided fowl for the feast, the rest of the menu remains an educated guess; the Pilgrims likely offered turkey, waterfowl and other wild game, seafood such as mussels, lobster and eels, vegetables, grapes and plums, and nuts. 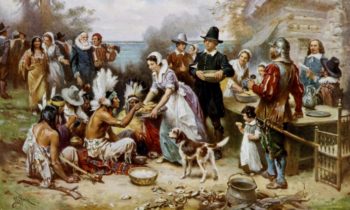 The legacy of giving thanks, particularly with a shared feast, has survived the centuries. Several U.S. presidents — starting with George Washington in 1789 — issued Thanksgiving proclamations, but it wasn’t until President Abraham Lincoln’s 1863 proclamation that Thanksgiving became an annual national holiday. He called for it to be celebrated on the last Thursday of November. It was in the dark days of the Civil War, but Lincoln said that difficult times made it even more appropriate for blessings to be “gratefully acknowledged as with one heart and one voice by the whole American people.”

A 1941 congressional resolution moved it to the fourth Thursday to assure a longer post-Thanksgiving, pre-Christmas shopping season in years when there are five Thursdays in November.

Each year, the president also “pardons” a Thanksgiving turkey — actually two turkeys, since one is a backup in case the other decides to misbehave during the ceremony. The two fowl, spared from the oven, live out the rest of their lives at a children’s petting zoo.

Thanksgiving sees the most air and car travel of the year as families and friends try to reunite for the holiday. Many Americans enjoy a local Thanksgiving parade, or the annual Macy’s department store parade, televised live from New York City. Others watch televised American football. Overseas, U.S. troops are served a traditional Thanksgiving dinner.

Turkey with stuffing, mashed potatoes and gravy, sweet potatoes, cranberry sauce and pumpkin pie are staples of the Thanksgiving feast, although there are meat substitutes such as “tofurkey” (combining the words tofu and turkey), a loaf made from seitan (wheat protein) or tofu (soybean protein).

Thousands of charitable organizations serve hot Thanksgiving dinners to the needy — and to anyone who shows up — and millions of frozen turkeys are donated to families each year.