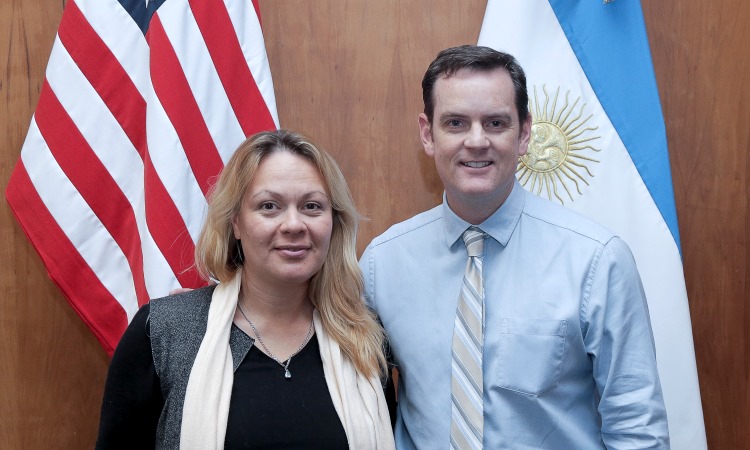 This morning, the U.S. Department of State recognized Argentina’s Alika Kinan with the Trafficking in Persons Hero Award –the highest recognition by the Government of the United States to distinguished global leaders, for their relentless fight against this terrible practice.  Secretary of State Rex Tillerson presided over the ceremony.

Ms. Kinan was recognized for her extraordinary courage in pursuing justice against her traffickers, her selfless efforts to assist the government in prosecuting and preventing human trafficking cases by sharing her experiences and knowledge, and her tenacity in advocating for greater protections for vulnerable groups and victims of trafficking in Argentina.

Ms. Kinan is the first survivor of human trafficking in Argentina to win a civil case for damages for exploitation in sex trafficking.  In November 2016, she actively helped secure a conviction of her traffickers and won the civil judgement and award; this was the first time in the country’s history that a local government was ordered to pay a civil award to a victim of human trafficking.

Since her rescue from her trafficking situation in 2012, Ms. Kinan has advocated tirelessly for the rights of women at both the national and provincial levels.  She has partnered with the Argentine government to enhance its response to human trafficking and continues to fight on behalf of trafficking victims for greater access to essential services such as medical treatment, housing, job training, and education.  Ms. Kinan frequently works with the Argentine General Prosecutor’s Office, the Public Defenders’ Office, and the Ministry of Justice to improve the prosecution of human trafficking cases at the national and provincial levels.

Ms. Kinan testified in Argentine Congressional hearings in support of draft legislation aiming to provide compensation to TIP victims that resulted in the Senate’s unanimous support for the bill.  She also participates in training efforts and advises provincial governments, NGOs, and local universities on programs to prevent trafficking in persons across the country.

Each year, the Department of State honors individuals around the world who have devoted themselves to the fight against human trafficking.  These individuals are NGO workers, lawmakers, police and security officers, and concerned citizens who are committed to ending modern slavery. They are recognized for their tireless efforts—despite resistance, opposition, and threats to their lives—to protect victims, punish offenders, and raise awareness of ongoing criminal practices in their countries and abroad.