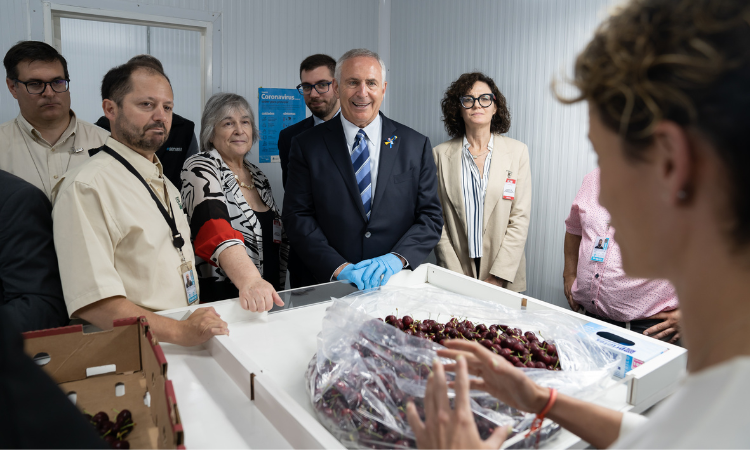 After the visit, representatives of APHIS and SENASA signed a revised bilateral agreement for the preclearance program, which facilitates safe trade by incorporating changes to benefit local producers and exporters and strengthens the ability to safeguard agriculture and natural resources from external pests.  Officials from the government of Argentina joined Ambassador Stanley at Ezeiza for today’s events, including the Secretary for International Economic Affairs at the Ministry of Foreign Affairs, Cecilia Todesca Bocco, SENASA President Diana Guillén, and SENASA National Director for Plant Protection, Diego Quiroga.

The preclearance program is a unique, 40-year partnership between the United States and Argentina, and Argentine fruit producers and exporters.  APHIS and SENASA inspectors work together to ensure that apples, pears, blueberries, and stone fruit, like cherries, bound for the United States are free from pests and diseases that could harm U.S. agriculture and natural resources.

“Today, I visited the Ezeiza International Airport to learn how cherries and blueberries from Argentina are shipped to the United States.  Last year, this preclearance program facilitated the export of 44 million kilograms of fruit from Argentina to the United States, worth over $75 million. It’s incredible! Our two countries have been working together under this program for almost 40 years, and we look forward to continuing our successful partnership in the future.” said Ambassador Stanley.  “The signing of the renewed agreement comes at a very opportune time.  Just this morning, we opened the first Trade and Investment Framework Agreement discussions with Argentina since 2018, with the goal of increasing the trade and investment between our two countries.  Agreements like the preclearance program are essential to that goal and I’m proud to join today’s signing ceremony.”