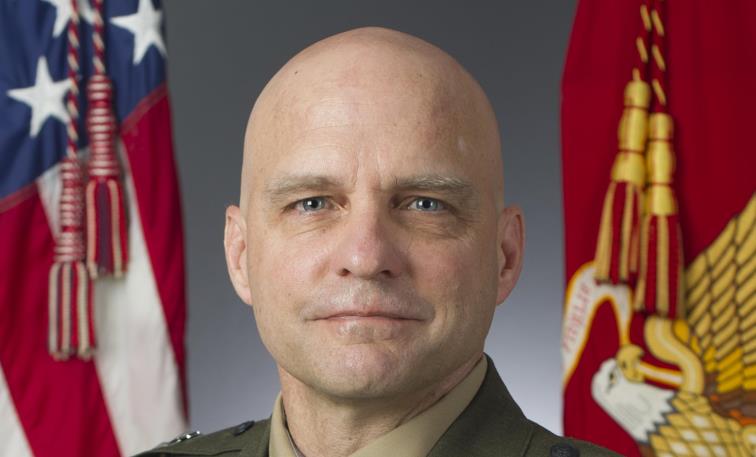 Major General David Bellon is the Marine Component Commander for SOUTHCOM.  His first visit to Argentina during the week of November 6, 2017 will be to Buenos Aires and Bahia Blanca where he will meet with leaders from both the Argentine Navy and Marine Corps with the goal of continuing to build relationships with key leaders in the Argentine military.

Major General Bellon was born in Fort Polk, Louisiana and raised in St. Louis, Missouri.  He went to college at the University of Kansas, graduating in 1987. He subsequently attended the University of Missouri School of Law where he graduated in 1990.  He was commissioned as a second lieutenant in 1989.

In 1997, he resigned his commission and left active duty. He immediately joined the Select Marine Corps Reserve and commenced service with 4th Light Armored Reconnaissance Battalion (LAR).  At the same time, he began his civilian law career working for a law firm in Los Angeles County, California. While with 4th LAR, Captain and then Major Bellon served as Fire Support Coordinator, Company Commander, and Operations Officer.  In 1999 he started his own law firm in Oceanside, California.

In January 2003, Major Bellon was activated in support of OPERATION IRAQI FREEDOM (OIF) 1.  During OIF 1, he served as Operations Officer for 4th LAR with both TASK FORCE TARAWA and TASK FORCE SCORPION.  He was de-activated in October of 2003.

Upon returning home in 2005, Lieutenant Colonel Bellon assumed command of 3d Battalion 23d Marine Regiment.  He was activated for a third time and subsequently deployed with 3d Battalion in 2007. The battalion executed counter-insurgency operations in and around the city of Al Haditha, Iraq and returned home in April of 2008.

In 2008 Lieutenant Colonel Bellon was selected as the Marine Corps Reserves representative as a full time student at the Naval War College in Newport, Rhode Island.  While at War College, he was promoted to colonel and also received additional activation orders for deployment in support of OPERATION ENDURING FREEDOM.

Brigadier General Bellon deployed to Afghanistan in September 2009 with the British 6th Division. While in Afghanistan, he served as the Chief of Operations for Southern Afghanistan during NATO’s 2010 surge of forces to secure the strategically vital area in and around Kandahar City.

In 2011, Brigadier General  Bellon Joined QRS Recycling where he is the Managing Partner for QRS Direct as well as a partner with Re-Poly, a QRS affiliated company specializing in manufacturing plastic resins from recycled plastics recovered from the waste stream.

His personal decorations include the Bronze Star Medal with Valor Device and three gold stars in lieu of fourth award as well as the Legion of Merit.